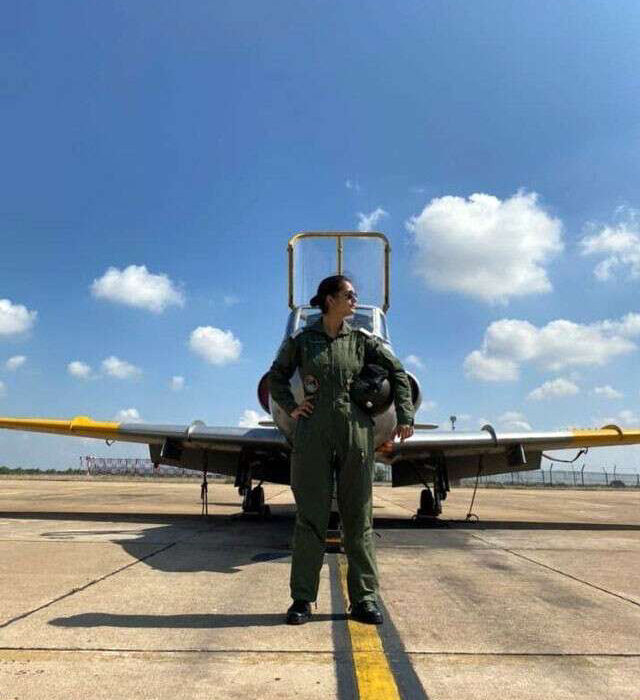 Bringing glory to Jammu and Kashmir, Flying Officer Mawya Sudan will be serving as the first woman from the Union Territory to be commissioned as a fighter pilot in the Indian Air Force. Congratulations to her!

After the authorization from the ministry, IAF initiated a scheme for induction of women Short Service Commission officers into the fighter stream of the Flying Branch in 2016, under which twelve women fighter pilots have been assigned to date.

Women fighter pilots are enrolled and deployed in IAF as per strategic requirements and operational mandates within the laid down protocol, which is reviewed from time to time,

Making a glorious history in the Indian Air Force department, the first batch of IAF women fighter pilots encompassed Bhawana Kanth, Mohana Singh, and Avani Chaturvedi. Moreover, the Flying Branch, IAF women officers supervise in several other departments involving air traffic and fighter control, engineering, administration, logistics, and legal. However, till the IAF unlocked its entrances to women officers in 1991, women had been working only in the medical unit.

Looking Back At The History!

So, let’s have a look at the history of women fighter pilots of IAF.

Flight lieutenant Bhawana Kanth was the first woman fighter pilot to take part in the Indian Air Force’s (IAF’s) tableau at the Republic Day parade at Delhi’s Rajpath. Kanth entered the fighter squadron in November 2017 and her first solo flight was on MiG-21 Bison in March 2018. She is presently placed at an airbase in Rajasthan. She, along with Avani Chaturvedi and Mohana Singh, was inducted into the IAF as the prime women fighter pilot in 2016. It is to be appreciable that 12 women have been commissioned as fighter pilots after an experimental strategy for their introduction into the IAF’s fighting stream that was inducted in 2015.

Also Read: How Many Moon Craters Are Named After Women? We Promise You Would Be Shocked!

The Inspiring Journey Of Mawya Sudan

Mawya Sudan, a women pilot from Lamberi Village in Rajouri, Jammu, and Kashmir, was designated into the Indian Air Force (IAF) combat stream at the Air Force Academy at Dundigal, Hyderabad on June 19, 2021.

Mawya cracked the Air Force Common Admission Test (AFCAT) after graduating. While she awaited her exam results, she joined a postgraduate course in defense studies at Panjab University.

She enrolled in the IAF as a Flying Officer after completing her graduation from the city of Lamberi. Mawya is the IAF’s 12th female fighter pilot and the first one from Rajouri. Air Chief Marshal Rakesh Kumar Singh Bhadauria governed the joint graduation passing out ceremony at the Air Force Academy in Hyderabad.

Mawya’s father Mr.Vinod Sudan, conveyed his contentment in his daughter’s achievement. He said, “I am feeling proud. Now she is not just our daughter but a daughter of this country. We have been receiving congratulatory messages since yesterday.”

Manyata Sudan, a JE in the Shri Mata Vaishno Devi Shrine Board, said that Mawya has always been enthusiastic in the Air Force and strived to be a fighter pilot since she was in primary school.

Sushma Sudan, the mother of Mawya, said with pride, “I am happy that she has worked so hard and achieved her goal. She has made us feel proud.”

Also Read: 7 Inspiring And Empowering Quotes of Kamala Harris That Will Revive Your Inner Confidence And Strength

In addition, many political leaders and several celebrities have complimented Mawya Sudan on her incredible victory.

We, at Femsay, wish Mawya Sudan the heartiest congratulations for her life journey with the IAF. Let her voyage of life be an incredible insight for the millions of little girls across the nation to attain and achieve whatever they want to.