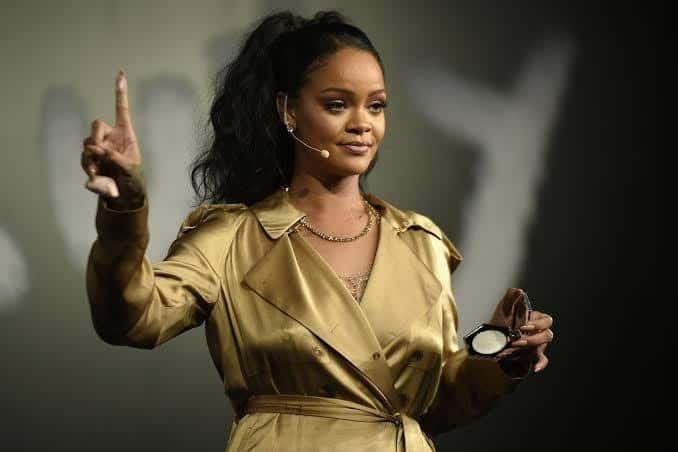 As per the latest Forbes magazine report, the Barbadian performer’s net worth of 1.7 billion USD makes her the second wealthiest female entertainer after Oprah Winfrey.

The Grammy award-winning musician became the wealthiest female entertainer after she officially became a billionaire with a net worth of 1.7 billion USD, as disclosed by Forbes.

31-year-old Robyn Rihanna Fenty is a popular Barbadian singer who has become a fashion icon and cosmetic entrepreneur. Soon, she’ll be the leading Black woman in charge of a prominent luxury fashion house. All those achievements add up to $600 million in money, making her the richest female composer in the world.

How Does Rihanna Make Her Money?

Well, music is not the major source of her revenue. Rihanna earns 50 percent of her approximate net worth from her ‘Fenty Beauty Cosmetics’.

According to the Forbes report, the major part of her wealth is from her investment in the cosmetics company, ‘Fenty Beauty’, which Rihanna launched in the year 2017.

She had founded Fenty Beauty in 2017 to care for dark-skin tone customers. Her brand has a wide range of 50 skin tones for women of various colors.

‘Fenty Beauty’ accounts for over 1.4 billion USD. The capital in the company, plus her 30 percent share in the lingerie line, ‘Savage X Fenty’, and her profession as an entertainer takes her net worth to be almost 1.7 billion USD. This makes her the second wealthiest female entertainer after Oprah Winfrey, whose net worth is estimated to be 2.7 billion USD.

“The majority of her 1.7 billion USD estimated net worth is not from singing but from cosmetics,” Forbes writer Kerry Dolan said.

“From a super-successful cosmetics line which, when it was launched, drew lots of praise because there was something, like, more than 40 shades for all ranges of skin tones, which was something that at the time, not very many cosmetics lines had been that inclusive,” Kerry Dolan added.

Also Read: Why We Must Build Entrepreneurial Skills In Young Girls?

The whole personal care enterprise in America has grown greatly in recent years. As per the grand view research, it could grow to more than $200 billion in sales by 2025, up from $130 billion in 2016.

Hits Of Rihanna: Tune In!

Rihanna is also recognized for hits like ‘Umbrella’ and ‘Love The Way You Lie’. According to a report, the musician now ranks second behind Oprah as the wealthiest female musician on the planet.

Also Read: Looking At The Patriarchal Society Closely And How It Depreciates Women

“Rih, self-made billionaire. What does that mean to you?” the interviewer asked. Listening to him, she just simply smiled and humbly answered, “God is good,”

Now, the short video is going viral on social media, and netizens are applauding the modest manner of Rih. Some mentioned her reaction to “self-made billionaire” as priceless.

During the event, Rihanna wore a pink furry hat, ripped denim shorts, a tube top, and strappy heels. No wonder, why she became the most famous fashion icon in the world!