Abortion in India: The Society, The Law and The Struggle 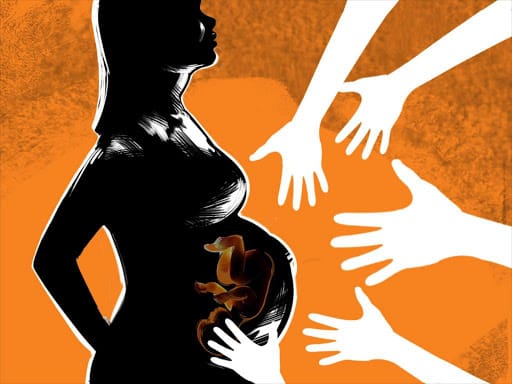 With their roots in the British Offences against the Person Act 1861, the Indian Penal Code 1862 and the Code of Criminal Procedure 1898 made abortion a felony punishable for both the woman and the abortionist, unless the woman’s life was in danger. Abortion laws were liberalized throughout Europe and the Americas in the 1960s and 1970s, and this trend persisted in many other parts of the world into the 1980s. In 1964, India’s abortion laws were liberalized in response to high maternal mortality from unsafe abortions. They realized that the majority of women seeking abortions were married and faced no social pressure to hide their pregnancies, and that decriminalizing abortion would allow women to pursue abortions in legal and healthy environments.

The Prevailing law
On March 16, 2021, the Rajya Sabha passed the Medical Termination of Pregnancy (Amendment) Bill, 2021, which amends the Medical Termination of Pregnancy Act, 1971. On March 17, 2020, the Bill was passed by the Lok Sabha.
Special categories of women, which would be specified in the amendments to the MTP Rules and will include survivors of rape, victims of incest, and other vulnerable women (such as differently-abled women, minors), would have their upper gestation limit increased from 20 to 24 weeks. Just one provider’s opinion will be needed up to 20 weeks of pregnancy, and two providers’ opinions will be required for terminations between 20 and 24 weeks of pregnancy.
The Medical Termination of Pregnancy (Amendment) Bill of 2021 aims to increase women’s access to safe and lawful abortions for medicinal, eugenic, humanitarian, or social reasons. The amendments include the substitution of some sub-sections and the insertion of some new clauses under certain sections of the existing Medical Termination of Pregnancy Act, 1971, with the aim of increasing the upper gestation limit for termination of pregnancy under certain conditions and strengthening access to comprehensive abortion care, under strict conditions, without jeopardizing service and quality of care. It is a step toward women’s safety and well-being, and many women will profit from it.

The Society’s Perception of Abortion
Despite the fact that abortion has been legal in India for nearly five decades, unsafe abortion remains the third leading cause of maternal mortality, accounting for 8% of all maternal deaths in the country. Every day, ten women die, and thousands more suffer severe and permanent injuries as a result of unsafe abortion. However, the majority of deaths caused by illegal abortion can be avoided.
According to a recent report published in Lancet Global Health, just 22 percent of India’s 15 million annual abortions take place in a public or private health facility and are conducted by qualified professionals, while the remaining 78 percent take place outside of health facilities.
The majority of Indians live in rural areas, where safe abortion services are unavailable due to a shortage of qualified providers and a variety of individual and social factors.
Furthermore, the stigma associated with abortion encourages women to pursue less secure methods of abortion termination when they should have access to safe, low-cost, and stigma-free abortion care at public health facilities. According to an IDF report published in BMC Public Health 2012, up to 58 percent of women feel guilty and consider abortion to be a sin when they think about it.

What can be done?
Abortion care should be decentralized to the last mile, so that women closer to the community can access them. One way to improve access to safe abortion care is to expedite changes to the MTP Act that would enable abortion to be provided by mid-level providers that are closer to the community. This will greatly increase the number of providers who would perform abortions. However, this approach is insufficient in itself because other sociocultural obstacles, such as a lack of knowledge of abortion’s legality, a lack of comprehension of the dangers of illegal abortion, and the myths, stereotypes, and stigma associated with abortion, must be addressed holistically.
We know what needs to be done to ensure that all Indian women have access to safe abortion. The judiciary, policymakers, medical community, and civil society groups must work together to overcome the existing challenges that women face and ensure that safe abortion services are provided in a compassionate and non – judgmental manner. Let us take responsibility for the unnecessary deaths and injuries that women face in a liberal legal system.