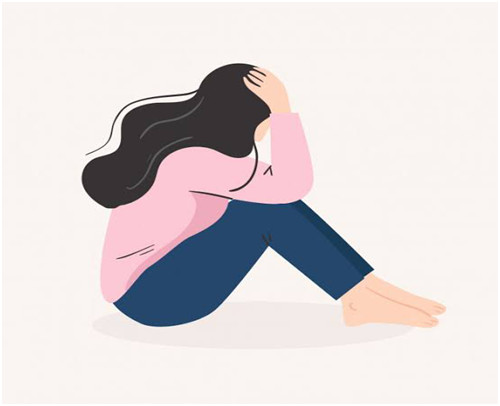 Did you know that April is the PMDD awareness month? Premenstrual Dysphoric Disorder (PMDD) is a mental health disorder that is often under-discussed in the ambit of menstrual health. PMDD was added to the diagnostic and statistical manual of mental disorders (DSM-5) in 2013. However, it was only in 2017 when researchers at the National Institute of Health were able to find a clue that demonstrators, PMDD react differently to progesterone and estrogen. This is a validating finding for those who live with PMDD as it establishes a biological basis for the disorder. It’s not almost spontaneous sentimental fluctuations that menstruators should be able to control.

A vast number of women undergo some level of emotional or physical distress a few days before and just after their menstrual period begins. About 5% of women between the age of 20-30, however, experience premenstrual symptoms that are so terrible that they cause serious mental discomfort and impede work, school, or relationships and thereby meeting the criteria for Premenstrual Dysphoric Disorder or PMDD. Another 18% to 35% of women suffer from less severe, but bothersome, premenstrual symptoms.

Although sometimes ignored as trivial, PMDD can disrupt a woman’s life and relationships so entirely, she may lose hope that life itself is worth living. About 15% of women with PMDD attempt suicide. Fortunately, treatment options exist for PMDD, but the most effective are not always specified.

Premenstrual Dysphoric Disorder (PMDD) is a terrible form of PMS that comprises physical and behavioral signs that usually determine the beginning of the period. PMDD inflicts severe mood swings that can disrupt daily routine and harm relationships. Symptoms include intense distress, despair, petulance, or irritation, and common PMS symptoms such as breast tenderness and bloating.

Besides, it also causes sleeping disorders such as excessive sleepiness or insomnia.

PMDD, psychologists Experts like Chrisler, Caplan, Hartlage, and Endicott explain that it’s crucial not to jump to conclusions with patients. “If a woman tells you she has PMS or PMDD, you should be supportive and shouldn’t assume that it’s just hormonal and nothing can be done about it,” says Chrisler. “Ask about stress, ask about relationships. Explore some other things.”

The various treatments prescribed by the PMDD experts are the intake of Antidepressants that slow the serotonin which provides effective treatment for premenstrual dysphoric disorder (PMDD). These drugs alleviate PMDD more quickly than depression, which means that women don’t necessarily have to take the drugs every day. Also, Hormone therapies provide additional options but are generally considered second-line medications.

Some dietary and lifestyle changes may also help reduce symptoms. PMDD is the least discussed mental health problem and needs more light and attention. Through deep gentle conversations and sharing needful experiences, we can support each other and can spread love the way we all want.