Ever wished for a husband taking equal responsibilities in household chores? Here’s something for y’all to have a look at! 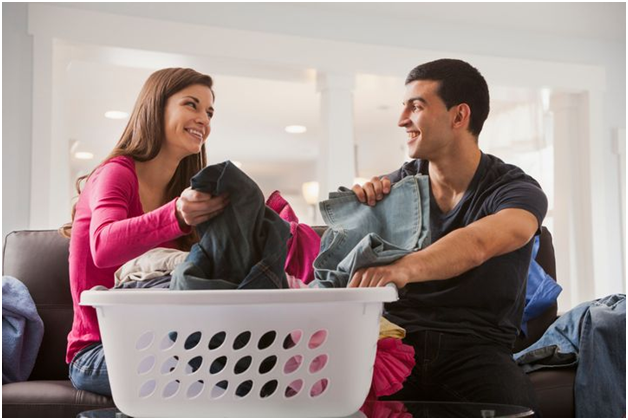 So, now as I have your attention my tough cookies, let me take you through maybe a mere bolstered social media glorification of a section of a modern world or lifestyle, i.e., an equal partnership of men and women in contributing to household chores. Amid the society’s prevailing notion where on the one hand, accepting a female as a homemaker or the one who is handling it all and on the other hand, simply not be able to escape a frown on their faces upon a man introducing himself as a ‘house husband’, what is exactly stopping or controlling everyone from believing the fact that these roles can be swapped without any judgments or the effort needs to come from both ends.

The trend of stay-at-home husbands seems to have gained acceptance among couples who feel such a setup can work well which not only involves the “modern” generation but few from our parents gen too as I just can’t forget to mention my father in breaking the stereotypes in true means. In fact, talking of recent times, during the lockdown, we saw bolstered social media’s glorification of a large number of men who contribute to household chores or wait for a second, from another lookout are “contributing” to household chores during the lockdown. Well, I let that on you to decide.

As if the man of the house has finally been domesticated under the lockdown, the same men would never even bother to know how to cook or sweeping the floor but are posting pictures of themselves doing household chores.

When women bore the burden of these unpaid jobs, no one really bothered where somehow, their professional jobs are still not considered “important” because they aren’t the primary bread-winner of the family. And unless women are free from the burden of unpaid labor as they can still not neglect their duties towards the household they will never be truly free to pursue careers potentially or gain equality in their personal relationships. If a man even as much as washes a spoon by himself, he is a liberal, forward-thinking angel.  Besides men need to realize that household work is in some way not unpaid as by cooking meals at home clearly saves you money that you may pay to a hired help.

So who is at fault if men, despite having a more modern outlook towards equality today, are not participating in household chores on an equal footing? Are they lazy or reluctant to do unpaid labour? Or it is women, who find it difficult to trust men with simple tasks such as folding the laundry? Or is it both, along with an added dash of stereotyping which lingers deep within our heads? Besides, women need to trust men more, and not question their process of getting a household chore done. It takes two to build a home and sustain it.

Relationship
Is your relationship stressing out? Here are 5 signs to determine whether you are in a toxic relationship or not!
Relationship
Not sure if that person is right for you? Find out the Qualities your significant other should have.
Relationship
Bored of old sex routine or a newbie in sex? Here are 8 best sex positions to get you covered with pleasure & fun